Deciding to run a marathon

Running a marathon, should you do it? It’s the end of April, and the London Marathon is over for another year.

There are certainly highs and lows most years, and 2016 is no different.

On the plus side, the incredible amounts raised for charity, the stories of personal triumph; and the one millionth finisher.

Unfortunately, this year, David Seath (a Captain in the army), collapsed and died. It’s a stark reminder of just how challenging a marathon can be.

So if you have been caught up in the well-spring of emotion, and are trying to decide whether or not to run your first marathon, here are some pros and cons to weigh up. 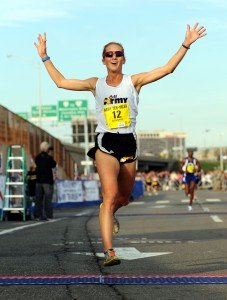 Why run a marathon?

If you are fairly sedentary or are only used to moderate bouts of exercise, then the thought of running a marathon can seem like a distant dream.

Even though marathon running has grown exponentially over the last 30 years, it is still a huge goal on many people’s bucket list.

There are many potential reasons to run a marathon, but only a handful that are valid. Probably the biggest and best reason is that you have a burning desire to run one.

There is no reason to rationalise the thought. If it is there, it’s a good starting point. If your motivation is intrinsic (coming from within) you are far more likely to stick with it through thick and thin.

It can also be highly motivating if you have a mission or cause. Something or someone you are running for.

It can be used jointly as an inspiration and a motivation. But bear in mind, that the cause is more important than the run. It might be that there are better and more suitable ways to raise funds and awareness.

And let’s not forget the physiological, psychological and social reasons to run a marathon.

Physiologically running has been shown to decrease the risk of diabetes, reduce the risk of cardiovascular disease, improve bone density and support weight control.

Studies have shown that running can help to counteract depression. And of course, if you decide to join a running club it can be a great social outlet.

The possible downside of running a marathon

As we alluded to earlier, there are potential downsides too. Of course, as tragic as they are, deaths are statistically very rare. There are far more real physical complications involved.

To prepare for a marathon there is no way to avoid the hard yards. For the body to store enough glycogen on race day, you are likely to have to run at least 2 or 3 long runs in the weeks leading up to the event itself.

So including the marathon itself, you could be running as much as 80 to 100 miles within a space of a few weeks. It’s tough! It has been suggested that a third of all marathon runners get injured during training.

Back pain, joint pain, and gastrointestinal issues have all been attributed to marathon training.

In truth, unless you are VERY fired up to run one, consider other options too. The hours and the miles away from the course itself are very unglamorous.

But if you do decide to commit, the accomplishment will live with you forever.